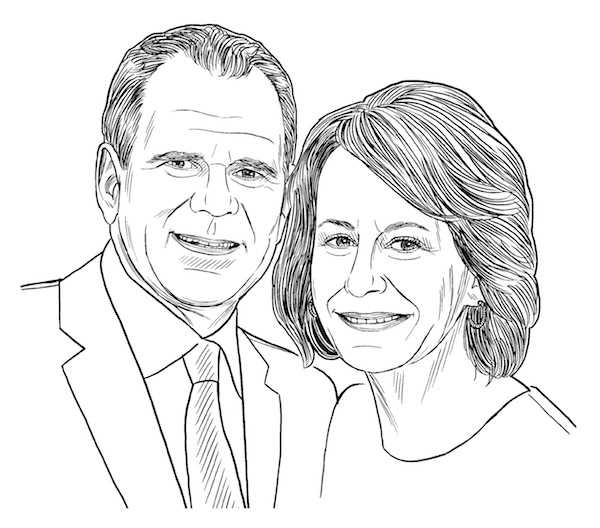 Dale ’71 and Lynn (Devine ’72) Piggush met in the hallways of Bishop McNamara in 1969. They were married in September of 1974 and recently celebrated 43 years of marriage. Dale and Lynn have 3 children. Neil ’98 and his wife Courtney and Scott ’01 and his wife Kim (Osenga ’01) live in Bourbonnais. Their daughter Lauren ’07 and husband Chris Reese reside in St. Louis, Missouri. They have 5 grandchildren, Sophia, Grayson, and Avery, Brooks and Faith. Three are of school age and attend Bishop McNamara Catholic School in Bourbonnais.

Dale and Lynn have been involved at Bishop McNamara in many ways. Dale constructed sets and stages in the cafeteria and gymnasium during the Madcaps years to include building a rising platform beneath the stage the year the Phantom of the Opera was popular. He managed the construction project when the all-weather track was built, coordinating volunteer help and business support. In addition, he managed the construction project of the Hammes Bookstore located in the school cafeteria. Dale and Lynn served as the 2007 chairpersons for the Bishop McNamara Annual Dinner Auction, “Return to the Emerald City.” They served as co-chairpersons for the event in 2005, 2006, and 2008. They have also been “bid paddle” sponsors for the Bishop McNamara Annual Dinner Auction for many years.

Lynn spent her career as a school teacher. She began teaching at St. Martin of Tours in Kankakee and was the first teacher to start their kindergarten reading program. She implemented the same program for Bourbonnais Elementary School District #53 where she taught for 21 years. Her love of teaching inspired her to cosmetically refurbish the teachers’ lounge at the Bishop McNamara Kankakee site in 1995. Dale started his general contracting firm, Piggush Simoneau, Inc. in 1991 out of his detached garage. His firm which now specializes in industrial, commercial, and institutional construction employs over 50 people on a daily basis. Notable construction projects include: Centennial Chapel, Perry Student Life Center, and the Hammes Bookstore, all at Olivet Nazarene University; MedCentre East, Franco Conference Center and the Medical Mall in Bourbonnais for Presence St. Mary’s Hospital; St. Paul’s Lutheran Church and School; the school addition at the Bishop McNamara Catholic School Bourbonnais Site (known as Maternity BVM at the time), of which the kindergarten room was dedicated to Dale and Lynn; and plaza improvements in front of Maternity BVM Church.

Dale and Lynn have been very active within the community of Kankakee county. Lynn served on the board for the Presence St. Mary’s Foundation, was co-chairperson for the Maternity BVM school auction, served on the Women’s Giving Circle for the Kankakee Community College Foundation, and was on the interior remodel committee at Maternity BVM Church. Dale served on the Advisory Board for Presence Intergenerational, was a member of the Carpenters Local 496 from 1971 to 1994, served on the Board of Directors of the Catholic Education Foundation of the Diocese of Joliet, and has been the President of the Kankakee Contractors Association for over 20 years, from 1996 to current. Dale received the Larry Watson Legacy Award in 2016. Piggush Simoneau, Inc participated in Christmas in April homes throughout Kankakee county for a number of years. In 2015, Dale was awarded an honorary degree from Olivet Nazarene University in recognition of his support. Dale and Lynn were honored as Humanitarians of the Year by Presence St. Mary’s in 2006.

Dale and Lynn are members of Maternity BVM Catholic Church in Bourbonnais where Lynn serves as a Eucharistic Minister.