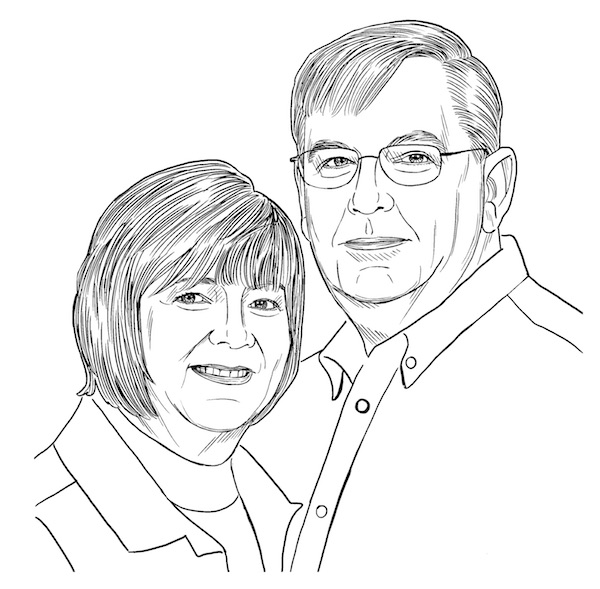 Kevin ’66 and Janis (Rathje) Nugent were married in 1970. Together they raised 5 children. Chad ’91 and his wife Mary, Keith ’93 and his wife Amy, Tiffany ’97 and her husband Keith Brack, and Devin ’99 and his wife Monica all reside in Manteno. Rory ’95 and his wife Samantha live in Chicago. Kevin and Janis have 17 grandchildren ranging in ages of 2 years to 20 years old. They have 1 grandchild who is a Bishop McNamara alum. They have 4 who attend Bishop McNamara Catholic School at the Bradley site, 1 at the Bourbonnais site, 1 in junior high and 3 in high school at the Kankakee site. They will have many more who will follow.

Kevin & Janis were actively involved in the Huddle Club at Bishop McNamara. They were co-chairpersons of the first Draw Down. They were avid supporters and construction specialists for Madcaps where Kevin built the largest stage ever erected in the gymnasium. They would always volunteer in one of the entertainment rooms during Madcaps serving food and drinks, or they could be spotted directing traffic. They were both highly involved in the remodel of the football locker rooms under the stadium bleachers and with the construction project that doubled the size of the football field concession stand. Kevin & Janis served as honorary chairpersons for the 2009 Bishop McNamara Annual Dinner Auction.

Janis was an elementary school teacher for the Manteno School District. She served as bookkeeper and President of Kevin Nugent Construction until her retirement in 2003. She spent most of her free time at sporting events cheering on her children. She still loves to watch her grandchildren compete today. Kevin started his own construction company, Kevin Nugent Construction, in 1973. He was a General Contractor, building homes from 1973-1989. He became a Union General Contractor in 1989 building commercial buildings and pouring concrete throughout Kankakee county. He was part-owner and President of Manteno Lumber and True Value from 1981-2005. He was an avid farmer until his retirement in 2010. He also helped develop several subdivisions in Kankakee county.

Kevin and Janis are committed to their community as well. Janis served as Manteno Township Clerk from 19851993. Kevin was a Trustee for the Village of Manteno 1981-1985 and was Chairman of Planning Commission from 1986-1990. He was awarded the Manteno Businessperson of the Year Award in 2006 from the Manteno Chamber of Commerce. They are members of St. Joseph Catholic Church in Manteno. Kevin was a board member at St. Joseph Catholic Church in Manteno from 1979-1983 and has been a liaison to the board for every construction project that has taken place since 1979. Kevin is a 3 rd degree Knight and was awarded Knight of the Year in 1998.