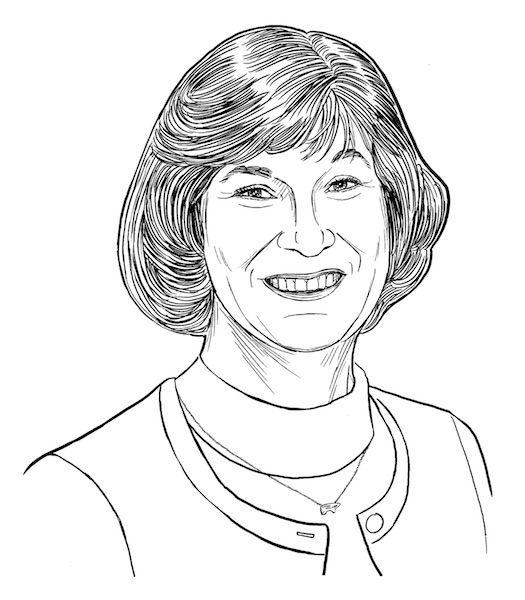 Sharon (Soucie) Jackson graduated from St. Patrick Central in 1956. In 1978, she married Don Jackson and they have four sons. Eddie ’86 and his wife Amy, Michael ‘88, and Daniel ‘95 all reside in Vail, Colorado. Bryan ’89 and his wife Jenn (Wieliczko ’92) live in Normal, Illinois. Sharon’s husband, Don, passed away in 2001. Her son Eddie and his wife Amy are expecting Sharon’s first grandchild in March of 2018.

In 1985, Sharon was hired at Bishop McNamara as the Recruitment & Public Relations Director and Moderator of the Irish Alumni Association Board. She has worked as the Director of Development and as the Director of Fundraising & Special Events. Under her direction, the Irish Alumni Association instituted the Annual Fund, Phonathon, Mass of Celebration prior to the Fall Sports Scrimmages, the Irish Golf Classic, and the Grand Reunion for alumni graduating in 1930 through 1955.

When Madcaps ended in 1987, it was decided to serve Thanksgiving dinner on Thanksgiving Day to those in need as a way of giving back to our community. Sharon coordinated the dinner for twenty years. When a chef couldn’t be found to cook the 900 pounds of turkey, two of her sons came from Colorado to do the job. Additional events and projects Sharon was responsible for spearheading were Sunday Bingo, the Ceile Calendar, and the Bishop McNamara Annual Dinner Auction. She has served on the Bishop McNamara School Board. Sharon was Grand Marshall of the 2006 Homecoming Parade and was Honorary Chairperson of the 2016 Bishop McNamara Annual Dinner Auction. In 2008, Sharon played an integral part in the development and execution of the Dorothy and Romy Hammes Hall of Honor.

As a way to maintain contact with the students, Sharon served as the moderator of the Z-Club, the teen branch of the women’s club, Zonta. Bishop McNamara’s Z-Club was the only one in the United States for both girls and boys during that time. At its peak, the club had eighty members and completed many service projects throughout the Kankakee community. In 2015, the “Sharon Club” was established which recognizes Bishop McNamara students in grades 9 through 12 that have completed 100 hours or more of Christian service to the community.

Sharon is a native of Kankakee and has been involved in many things within the community. She attended St. Teresa Grade School and is a charter member of St. Teresa Parish. She served on the School Board at St. Teresa, and was President of their CCW. In 1983, she was named St. Teresa CCW Woman of the Year. She received the St. Teresa Rose of Service Award in 2013. She is currently a member at St. John Paul II parish. In 1992, Sharon served as President of the Board for Catholic Charities in Kankakee and received the Spirit of Charity Award that same year. She served on the Board for the Presence St. Mary’s Foundation and was awarded Servant of the Year in 2013. In 2017, Sharon received the YMCA Ray Linder Service to Youth Award.

A large part of Sharon’s job was getting volunteers to help with all events and projects. Even today, it can still be heard, “Who can say no to Sharon?” Sharon retired from Bishop McNamara in 2013.