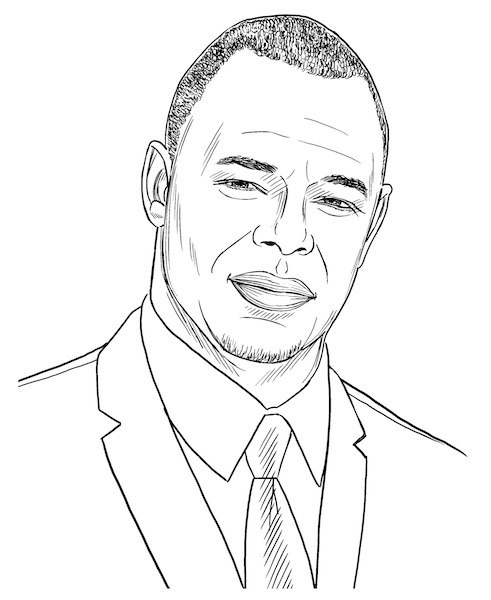 Tyjuan Hagler ‘00 was born and raised in Kankakee and currently resides in Westchester, Ohio. He is married to Verna Coleman-Hagler and has two sons, Daryan and Tyjuan II, and one daughter, Sarai.

Tyjuan was an outstanding football player and received numerous awards and recognitions during his high school career at Bishop McNamara. He was a highly-recruited scholar athlete and received a full athletic scholarship to play football at the University of Cincinnati. He was a three-year starter at outside linebacker and played in several bowl games for the Bearcats. He received the Brig Owens Most Outstanding Defensive Back Award in 2004. After graduating, he entered the NFL draft and was selected in the 5 th round by the Indianapolis Colts. He spent six seasons with the Colts, competing in two Super Bowls, winning Super Bowl XLI in 2007. Post-NFL, he continued his education and in 2014, graduated from Xavier University in Cincinnati, Ohio, with a master’s degree in sports administration.

In 2006, the Tyjuan Hagler Foundation was established where they believe “The goal is to enhance individual sports skills as well as instill character development through teamwork and good sportsmanship. Developing good character means developing the ability to make good decisions, becoming respectful and assuming responsibility for one’s own actions.” Through his foundation, Tyjuan continues to be committed to Bishop McNamara by holding The Tyjuan Hagler Free KIDZ-KAN-DO Summer Football Camp at Bishop McNamara’s Memorial Field. The camp brings hundreds of youth (ages 6-18) together annually for football instruction, including preparation for the pass, punt, and kick competition. A cheerleading camp for boys and girls is also offered at this camp. Parents, coaches, and community members enjoy this annual day just as much as the youth participants. This past summer marked the 11 th year of the camp. In addition, the Tyjuan Hagler Foundation recently sponsored its 6 th annual basketball tournament which is held at the Kankakee Valley Park District Rec Center. His foundation also encourages and supports educational advancement and recognizes and rewards 1-2 outstanding and deserving students with a partial financial scholarship to pursue a college degree. There is an extensive application that students must submit to be considered for the collegiate scholarship and foundation board members select the recipients. Use of funds is for tuition assistance, room and board, books, living expenses or for the purchase of education tools such as a laptop or tablet.

Tyjuan’s career continues with the NFL as Football Operations Senior Advisor. In this position, he helps players transition out of the NFL. He’s paying it forward and helps them find their next calling.